The Lutheran Medical Center campus (aka the "Lutheran Legacy Campus") is located at 8300 W. 38th Avenue and has been part of the SCL Health network since 2010. In 2018, SCL Health purchased a 26-acre parcel at Clear Creek Crossing west of I-70 at 40th Avenue. Clear Creek Crossing presents a rare opportunity for the Wheat Ridge community to think about the future of the Lutheran Legacy Campus in the heart of the City.

The Lutheran Legacy Campus Master Plan outlines a 20-year vision for the property and is based on six months of input from Wheat Ridge community members. Because the City’s 2009 Comprehensive Plan did not contemplate a potential change of use on the property, adoption of this master plan is a critical next in starting a new chapter for the property.

The current Lutheran legacy campus is centrally located in Wheat Ridge just west of Wadsworth, extending between 32nd Avenue and 38th Avenue. The campus is about 100 acres in size. Lutheran is the City's largest employer.

Medical uses on the property significantly pre-date the City. The site began as the Evangelical Lutheran Sanitarium in 1905, with numerous tents erected for the treatment of tuberculosis patients. In 1961, Lutheran Hospital opened as a non-profit general medical facility. In the 1970s, the site became known as Lutheran Medical Center, and services continued to expand with construction of new buildings, including the six-story tower in 1973. In 1998, Lutheran became part of Exempla Healthcare; and in 2010, Exempla joined the Sisters of Charity of Leavenworth, which became SCL Health in 2014. 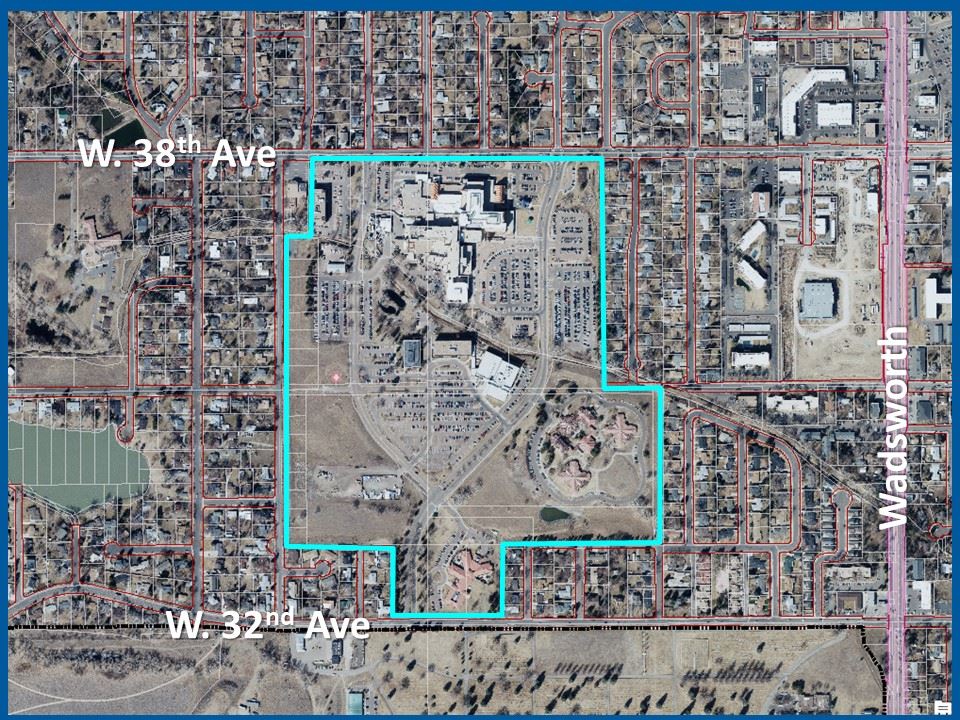 The site is currently zoned as a Planned Hospital District (PHD), and permitted uses include only hospitals, hospice care, and accessory uses customarily associated with a medical campus. The City’s comprehensive plan, Envision Wheat Ridge, designates the campus as a public land use noting that public uses, including the hospital, will “remain as community and neighborhood anchors.” The plan also designates the site for primary employment. These designations reflect the well-established hospital use, and the comprehensive plan does not consider other potential land uses for the site. It's through a master planning process, however, that possible uses for the future can be updated and expanded.

With SCL Health exploring plans for the medical campus at Clear Creek Crossing, the City and SCL Health are partnering to kick off a master planning process for the existing Lutheran legacy campus. A master plan is used to establish a long-range vision and to guide how a property can be reused in the future. It will take about eight months to complete a master plan for the campus, and that time frame allows for extensive input from the community including virtual and in-person events, surveys, and other activities. The master plan will be adopted as an update or amendment to the City's comprehensive plan to expand potential future uses on the campus.

Staff discussed the potential for a master plan process with City Council, which SCL Health agreed to fund, on November 2, 2020. On January 25, 2021, the City awarded a contract to MIG, Inc., a professional planning firm that will lead the community through the visioning and master planning process.

What is a master plan? The image at the right (click to enlarge) explains how a master plan fits into the processes of planning and development and how it relates to the the more general comprehensive plan and more specific development approvals.

How To Get Involved

The public engagement process for the Lutheran Campus Master Plan began in May 2021 and will last through October 2021 (all the steps are outlined here). The City and SCL Health are committed to partnering with the community to ensure all voices are heard in the planning process. In the coming months, project updates and engagement opportunities will be announced on the City's social media platforms, in the monthly Mayor’s Matters enewsletter, provided here on the City website, and on the interactive project site What's Up Wheat Ridge where you can subscribe for updates.